skip to main | skip to sidebar

Like A Tomato In The Rain I've Got That Feeling Again

Tuesday Randomness
I made a cake with the raspberries and blueberries. 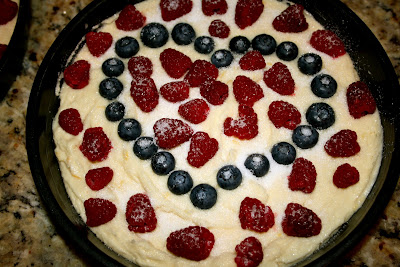 Two cakes, really. They turned out really well but I think I'll use more berries next time. 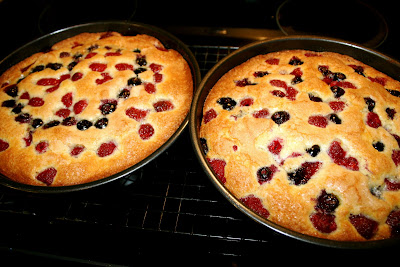 * * * * *
I left my pyjama top on Wolfgang's (wire) crate. Later, I saw that he had pulled it into his crate. I thought it was adorable that my puppy wanted to cuddle something that smelled like me. 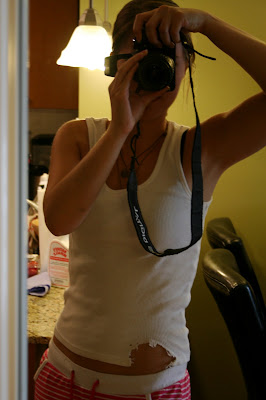 Please note the gaping hole. He did not just chew my top, he ate it. Like, tried to digest it. AND FAILED. Meaning, he later pooped my top.
* * * * *
If you haven't already, head on over to Hair Thursday and vote. It's pretty even right now (45% - 55%) so I'm still torn. Come on peeps, make my important decisions for me!
* * * * *
I think I'm going crazy.
Shawn and I have started looking online for potential condos. I have all of a sudden developed a fear of heights. I've never been great with heights. I have never loved heights. But I've never feared them to this degree.
I have refused to consider anything above the ninth floor. I am almost to the point of refusing to look at lofts because the thought of having a railing that I could potentially fall over is making it hard to breathe. It's bizarre. I don't know where this is coming from. Shawn showed me a 26th floor condo yesterday and I got this horrible, itchy feeling all over. It had a balcony! A 26th floor balcony! Madness!
Also, I have developed a severe hatred of tomatoes.
I have always loved tomatoes. My list of hated vegetables has always been short and unchanging: beets and mushrooms. That's it. I like a wide variety of vegetables and can fake it with most others. But lately I have been repulsed by tomatoes. If I could think of a stronger word than repulsed, I would use it. That is how much I dislike tomatoes now.
It doesn't make sense. I have not had a bad experience with a tomato. I didn't bite into a bad tomato. I did not find any worms in a tomato. I did not read an article stating that tomatoes cause cancer. And yet ... the thought of eating a tomato makes my heart beat really fast and my mind race. "How can I get out of eating this tomato? Why the fuck do I want to avoid tomatoes?"
You see? Crazy.
* * * * *
Because I need to end this post with something other than my insanity ... puppies! 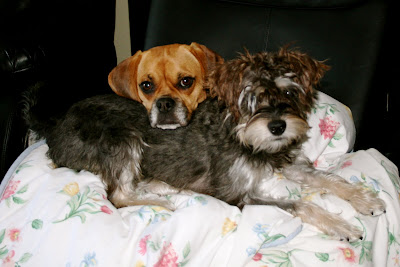 This blanket is usually draped over Wolfgang's crate because he doesn't sleep unless it's pitch black. It has been much too hot for that lately (I woke up one morning and his crate was like a little sauna) so the blanket has been moved to a chair. The puppies? LOVE IT. 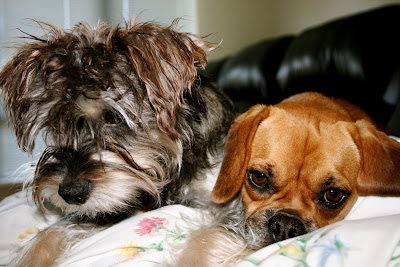 So now the blanket has to stay on the chair because it's the only place the puppies will chill out and be nice to each other.
Posted by Hillary at 06:09

I'm Hillary (with two L's!) I would rather read the book than watch the movie. I swoon for acoustic guitars and raspy voices. I spend far too much time chasing naughty pups. I believe that a day without cheese is a very sad day indeed.